“Murder simulator” has been one of the most popular rhetorical sledgehammers in the national FUD campaign against violent video games. Popularized by Dave Grossman in his 1996 book On Killing, the phrase was repeatedly used by provacateur Jack Thompson and the mainstream media when attempting to tie violent video games to real-life killings.

The term wasn’t just hyperbolic – it was actively misleading. Despite popular belief, only a small portion of violent video games focus on or reward murder. Those that do—most famously the Grand Theft Auto series—are so abstracted away from the real world that the “murder” has none of the weight or emotional resonance (not to mention legal consequences) of actual killing. In the sandbox world of GTA, killable NPCs are merely auto-generated clones without actual identities or resemblance to real people; their killing does not evoke the feeling of murder because there is no actual loss. 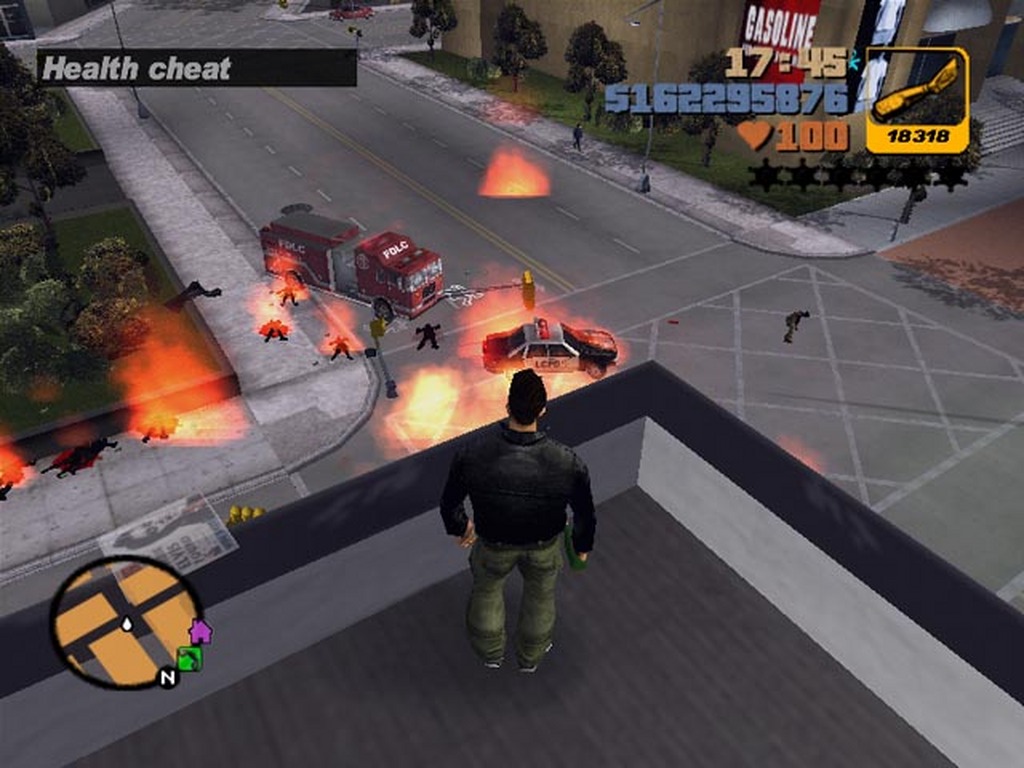 Make no mistake: murder, as a concept, as a reality, and as an action, exists in video games. It is, in fact, one of the things that video games love to feature, because it provides justification for killing and is the easiest way to create a villain and motivate a quest for vengeance against them. But it is not available to the player. The bad guys commit murder; the player kills them to save “innocents” from further murder, in a fantasy straight out of NRA literature.

The few video games that mandate that the player commit murder build their entire concept around this. Manhunt sought to evoke grindhouse horror and challenge our complacency with killing (at least in theory); likewise, the Kane and Lynch series casts the player as homicidal sociopaths with no redeeming qualities in order to provide a narrative justifcation for the high body counts of the first-person shooter. The Hitman series lies somewhere in between these self-serious games and the weightlessness of Grand Theft Auto; at heart they are puzzle games, but they characterize the assasination targets just enough to make clear that the world would be better off without them.

Many people will find that these reasons fall short: they’re not enough to justify the inherent unpleasantness of engaging in the heinous act of murder. And, for my money, that is totally legitimate. No one is obligated to experience revulsion, or to enact a fantasy of something they would never do in real life.

The good news is that all of these games are forthcoming about their murder-centric nature; you could gather it from their marketing or, in the case of Manhunt and Hitman, the title itself. Players who choose to play them have no ground to complain about the framing, and those who don’t can forget they exist and go on with their lives unimpeded.

In all my years of playing video games, I have encountered only one exception to this rule: The Last of Us, Naughty Dog’s celebrated post-apocalyptic morality tale.

To recap (and again: spoilers! Stop reading if you haven’t played the game and actually care!), The Last of Us casts the player as uber-survivor Joel, who must transport the teenage Ellie across the zombified ruins of the USA. The reason she is worth all this trouble is because Ellie has a mutation that makes her immune to the virus. The Last of Us is not a game that shies away from the obvious payoff (in this or any other plot point) and so arrives comfortably at the conclusion of this journey: Ellie’s cells can be harvested to create a vaccine, but at the cost of her life.

This leads to the inevitable choice: should Elli live at the expense of the human race?

For my money, it’s not much of a choice. Video games have a long history of championing the individual over an ends-justify-the-means utilitarian calculus, but if Joel takes action to prevent the creation of this cure, he’s basically committing genocide.

Yet no choice is given. Joel, the scripted character, decides that he is going to murder every member of the resistance movement in order to stop Ellie from willfully sacrificing herself for the sake of humanity. This is consistent with Naughty Dog’s penchant for making film-games, where spectacle and a tightly controlled dramatic arc are privileged over the player’s agency. Fair enough; I knew what I was getting into, and expected to have significant decisions made for me in cutscenes. That’s not a problem. Forcing me to carry out the murders in the game proper is.

When I realized that the only thing the game would let me do is kill, without warning or provocation, a group of young men who had dedicated their lives to bettering humanity, I forced Joel to commit suicide and turned off the game. I was filled with revulsion, and as angry as I’d ever been at a video game. Naughty Dog has asked me to buy into their world, and I had. Now they were asking me to destroy it, and I would not.

I’ve killed tens of thousands of people in video games. But in every case that asks for one, there is a justification, however flimsy. Usually, it’s as simple as them shooting first. Other times, it’s a battlefield operating under the rules of war. If nothing else, it’s Justified Murder – killing a few bad people in order to Save The World. Murder still, but not one so revolting I refuse to carry it out.

The exceptions to this rule are games that don’t take themselves, or their worlds, seriously, where the targets of killing aren’t people in any meaningful sense; they have no personality, no past, no future, no dialog, no meaningful intergration into the fictive universe; they are merely opponents, and killing one is no more evocative than taking a pawn in chess.

The consistency of this framing is genuinely remarkable, given how diverse the medium is in most other respects. The reason for this uniformity is pretty simple: even in a linear video game, the player has some degree of agency, and that creates a tension between the developer (who has a certain idea of how things should go down) and the player (who may well have a different idea). This necessitates a contract, one that is implicit in the design of almost every game:

1. The player shall give up a lot of agency in order to allow the developer to tell the story they want to tell, and sharply define the challenges the player faces;

This isn’t just a matter of fairness; the player has the ultimate veto power. At any time, and any moment, they can turn off the game, walk away, and never return. But at that point, the developer and the player have both wasted their time and money. Nobody wants that. Hence the contract.

Naughty Dog blows this contract out the airlock when they ask the player to murder a group of men and commit genocide in the same fell swoop. The developers seem to be relying on the fact that it is the game’s finale, and almost every player who gets that far will want to see the story through.

I’ll admit that they were right, and I completed the murder sequence, though more out of a desire to write this entry than to see what happened. The only way I could get through such a stomach-churning moment was to remind myself that it was all just a bunch of pixels, that no one was really being hurt and that my actions had no real-world consequences, at which point the story ceased to have any meaning.

There’s an argument that there are good thematic reasons for the story to end as it does; but all of these are based in a literary reading of the game, as if it were a passive narrative. But it is not a book, and it is not a film. Video game evangelists love to talk about the things games can do that no other medium can; they talk less of the things games are bad at. Having awful protagonists is one of those things. In passive media, we can look at them from a distance, maybe judging, maybe empathisizing, but ultimately taking no responsibility. In games, we are responsible for the actions of our protagonist. When the only option available to us is an action that we are not willing to own, then the only winning move is not to play.