Author’s Note: This is the first entry in Critical Mass Effect, a compendium of articles on Bioware’s ambitious, troubled space opera trilogy. The next two entries will focus on everything wrong and right in the series’ first entry, but my contempt for that game’s sidequests needed an entry of its own.

Mass Effect’s sidequests are not all of a kind; like the game itself, they’re compartmentalized based on their location. The “Citadel” sidequests tend to consist of running around, solving people’s problems through rigorous application of the dialog wheel. The “Main Planet” sidequests fulfill Bioware’s goal of quest density, giving you extra items to grab (or people to kill) while you traipse down the Geth-filled corridors you must walk to save the world. These two halves mesh well with the larger game, and share its strengths and weaknesses.

But more prolific than either of these are the Galaxy Exploration sidequests, which see you abandoning galactic salvation in order to dork around on desolate backwater planets. When I first played the game in 2007, these were what I was most looking forward to; Bioware had promised a wide range of uncharted worlds to map and explore in the name of discovery. I loved the idea of a little sandbox-RPG gameplay in Bioware’s tightly controlled world.

What I got were a bunch of featureless, cookie-cutter planets whose only relevance was as the location of the worst sidequests I’d ever played.  The degree of incompetence on display was a genuine shock from a developer as accomplished as Bioware. The sidequests in the Baldur’s Gate series were frequently novel, even surprising, and while Neverwinter Nights and KOTOR tended to provide rather generic retreads of other games’ sidequests, they were usually competent, well-paced, and polished.

In contrast, Mass Effect’s exploration quests genuinely feel like they were randomly generated without any consideration for how they played. They don’t just pale in comparison to Bioware’s previous works, but to the randomly generated levels in Diablo or any decent roguelike.

Rather than give you an encyclopedic listing of every banal questline, I’ll give a detailed description of a quest, only slightly worse than the average, which represents every reason why you’d never want to stray outside the game’s primary levels.

A Tale of Three Bunkers

This quest, like most of them, begins with a call from Alliance military command as Shepard opens up the starmap. For some reason, the VI (virtual intelligence, a sort of lower-grade AI) at a Lunar training base has gone rogue, taken over all the automated sentries, and killed the recruits stationed there. Shepard must go to the base, take out the automated defenses, and shut down the rogue VI.

It’s not a brilliant set-up, but there are some opportunities here. It’s the first opportunity to visit Sol, humanity’s home system, which one can assume is built up in a way that the far-flung desolate worlds aren’t. Maybe we’ll meet survivors of the attack who have only entered space for the first time. Maybe we’ll uncover an interesting mystery behind how this VI went rogue.

The player is dropped to the lunar surface in the Mako, the game’s heavily-armed rover. Like every secondary planet and moon in the game, the level is a perfectly square map of uniform, mountainous terrain. There is nothing to do but drive to the points of interest marked on it (which makes sense for the lunar training facility, but less so for the random “undiscovered” collectibles scattered around these planets). 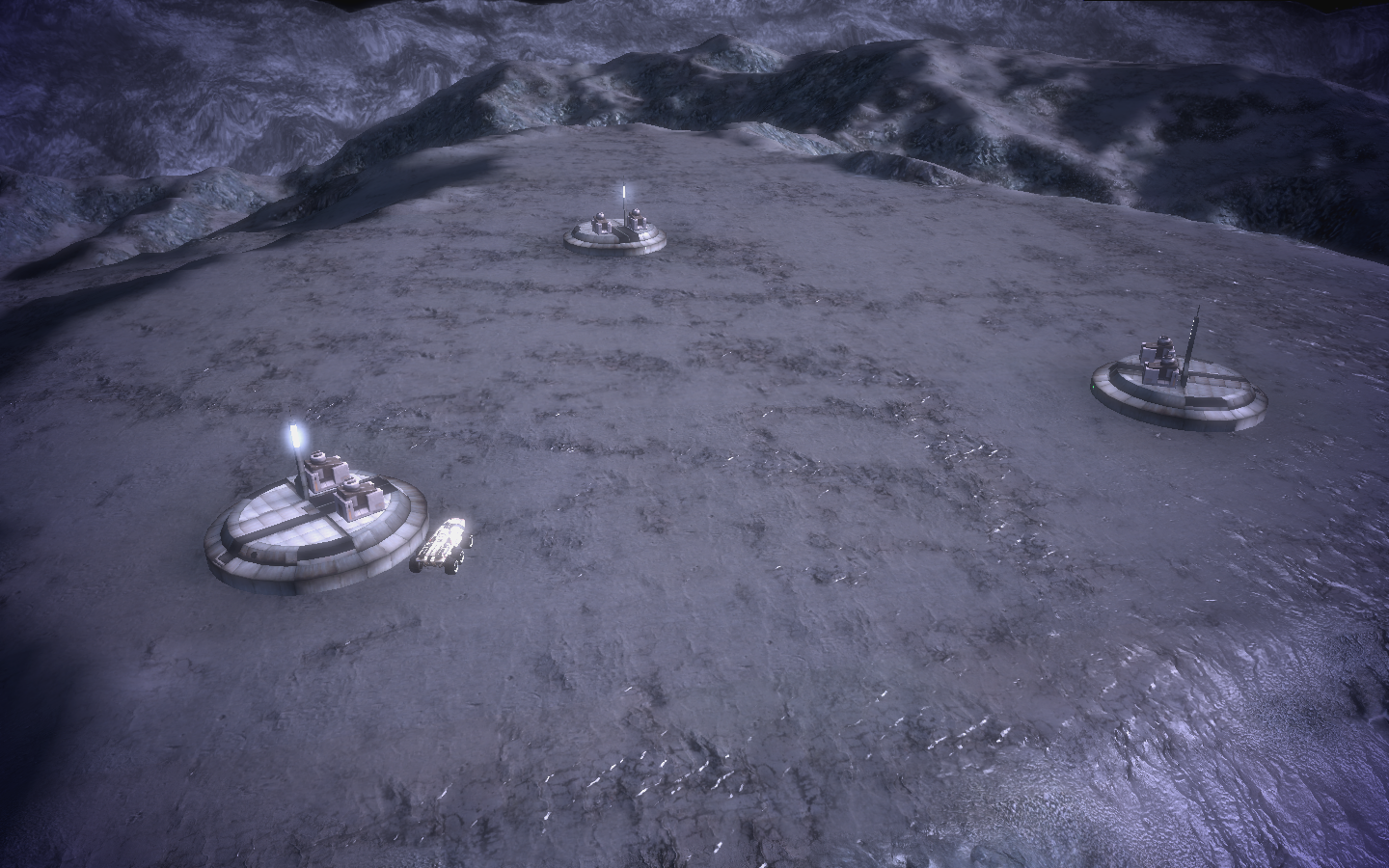 Upon reaching the lunar base, I was underwhelmed. In place of lunar complex, there were three squat, featureless bunkers surrounded by a few turrets. The turrets are, of course, hacked, and start spewing rockets at me. Fortunately for me (but not for the narrative’s integrity) these turrets only fire slow-moving rockets and have a comically lengthy reload, meaning my little lunar rover can blow up every one without taking a scratch. One wonders how these defenses are supposed to stop an actual army.

After taking out the turrets, Shepherd must choose one of the three bunkers to enter. Entering one will reveal that it is bizarrely empty, not only of survivors, but of corpses.  There’s no real facility, either – just a couple rooms full of crates. Apparently, to join the Navy, you must first train in the art of moving furniture. And then train in moving it some more, because god knows there isn’t a firing range or obstacle course on this sorry ball of rock.

To make this trip slightly less banal, the central room is filled with automated drones intent on killing you. By “drones” I mean “floating tripod turrets,” which curiously lack any sort of movement or attack animation. Because, you know, floating things don’t animate.

After dispatching these tiresome foes, you’ll make your way to the back of the facility to confront this nefarious virtual intelligence. But, ho-ho! The VI isn’t there! Because, you know, it’s virtual. It instead exists in a distributed set of servers, somehow outside the base (?), and to defeat it Shepard must destroy the 8 power terminals in this set of rooms. 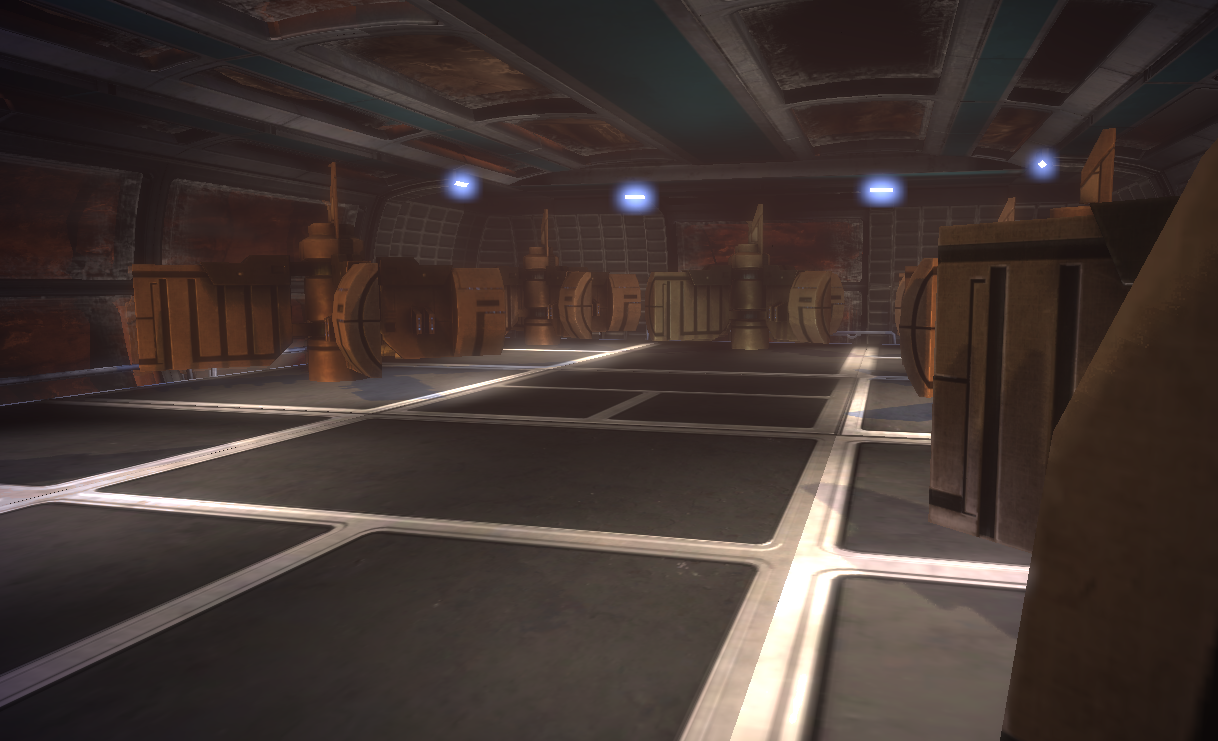 The nods to realism are almost charming, but it ends up that shooting defenseless, stationary objects isn’t a lot of fun. But do it you must, to reach the quest’s conclusion.

Sadly, this conclusion does not manifest here. Upon blowing up these stationary terminals, a text message pops up, informing Shepard that you have to repeat the exact same process in the other two bunkers. Here’s the thing: the other bunkers are identical to this one. They have the exact same floor plan, the exact same enemies, and the exact same frustratingly-damage-resistant power terminals. In the mind of the developers, the only thing more fun than filling out a form is filling it out in triplicate. 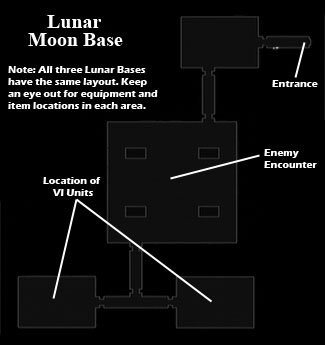 But no, this is Bioware. They can’t be that shameless, can they? You’re right! They’re going to spice things up with a little variety! Once the first set of terminals is down, the VI decides to flood the other two bases with toxic gas. Sadly, this doesn’t actually change the gameplay in any meaningful way; it just slows the player’s regeneration rate a little, meaning you have to be a little bit more cautious, meaning you get to spend a little bit of extra time standing behind a crate, waiting for your shield to recover.

After taking down the second base’s terminals, the real fun starts: SHIELDS! Shields over every doorway, and in front of the final set of power terminals. The shields don’t do anything, mind you, they just mean you have to spend thrice as much time shooting stationary objects as you did before – because if you’ve made it this far in the quest without offing yourself, chances are you enjoy it, you sick bastard.

I should have known better, but I figured there had to be SOME payoff to this, right? I mean, there’s still the Mystery of the Rogue VI! Yet upon performing these repetitive tasks and destroying the final VI terminal, the player receives only a single text message:

“A burst of white noise over all frequencies nearly deafens you. Your hardsuit’s heads-up display interprets it into a series of 0s and 1s:

They repeat again and again, blanketing all frequencies, until the lights on the final VI cluster flicker and die.”

At which point the quest is complete. That’s it. No character interaction. No resolution to how or why the VI went rogue. Just blowing up some computer terminals, in a featureless base, on a featureless world. It’s the antithesis of Bioware’s dialog-heavy, moral-choice infused quest template.

On the subject of VIs, the Mass Effect wiki says “Though they appear to be intelligent, they aren’t actually self-aware, just made with clever programming.” By contrast, this quest does not appear to be intelligent, most certainly isn’t self-aware, and wasn’t made with any cleverness at all, which is a description that applies to nearly every “exploration” sidequest that infects this game.

It’s not clear what happened; the most generous explanation is that Bioware committed to making a massive RPG, realized they didn’t have the time or manpower, and demanded that a few unfortunate developers churn out filler content at a rate that did not allow for any sort of quality control. Whatever the cause, the result is clear: the first chapter in one of the most celebrated series of the last decade contains some of that era’s worst design.